Located 10 km east of Chinchilla on the Warrego Highway is the Boonarga Cactoblastis Hall which was built by the local farmers and dedicated to the insect which ate its way through the jungles of prickly pear. At the time it was seen as the true saviour of rural Australia and thus it is an appropriate homage that a hall should have been dedicated to its memory.

The story is extraordinary. As early as 1788 Governor Phillip brought prickly pear to Sydney hoping to establish a fabric dye industry and produce the red used for soldier's jackets. Around 1848 Matthew Goggs reputedly brought prickly pear to the Chinchilla district. By 1870 the authorities recognised that the plant was out of control and by 1893 it had spread across the border to New South Wales. In 1895 Queensland listed prickly pear as a noxious weed and five years later it had spread and infested 4 million hectares. By 1900 the area covered by prickly pear was increasing at a rate of 400,000 hectares a year and by 1901 the government, recognising the scale of the problem, was offering £5,000 for a solution. That amount was doubled in 1907.

The prickly pear problem was so bad that farmers were using anything and everything to stop the growth. Someone suggested flame throwers. Someone else wanted to use World War I tanks. Around 1912 chlorine gas was being used and a year later farmers were demanding soda and arsenic to try to control the weed. By the 1920s there were 24,250,000 hectares of Australia covered with prickly pear. This was larger than the total area of the United Kingdom.

So great was the crisis that in 1923 the Queensland Government established a Royal Commission to investigate the problem and find a solution. As a result, in 1924, Alan Dodd went to America to explore the possibility of biological control. He went to Uruguay and Argentina and in Buenos Aires he came across the Cactoblastis cactorum moth. He decided to ship the moth's eggs to Australia. Initially 3000 eggs arrived from Argentina and from a population of 527 females a total of 100,605 eggs were hatched. Half these eggs were sent to the Chinchilla Prickly Pear Experimental Station and half were kept in Brisbane. The moth bred with enthusiasm. The second generation yielded 2,539,506 eggs. At the height of the operation Chinchilla was sending out as many as 14 million Cactoblastis eggs a day.

By 1931 the much-loved Cactoblastis had brought the prickly pear under control and the land around Chinchilla was being opened up to selection. There were 1318 applications for land in the first year. By 1936 the Chinchilla Prickly Pear Experimental Station was closed down. The story of Cactoblastis and its successful battle against prickly pear is the most successful example of biological content, ever. No wonder the locals decided to dedicate a hall to this small insect. 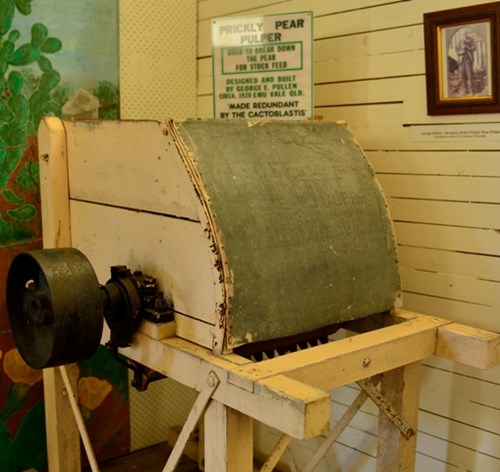 Some black and white images

Abandoned property overtaken by Prickly Pear in the Chinchilla area, May 1928 in Qld

Prickly Pear at Chinchilla, in Qld

Property at Chinchilla after treatment of Prickly Pear by using cactoblastis moths, October 1929 in Qld